Climategate cop-15 was I right or what?

My predictions on Gary Norths site have in part been borne out.
Also found here.
Cop-15 turned into a giant bargaining table where extreme things were proposed to drive everyone to a minimal compromise. Two rival proposals came out: one billing the first world and one billing the third world for the cost. Neither we meant to be signed. Both were decoys for the screaming mob. Meanwhile the heads of state, working in private, settled on a pact which promised everything, enforces nothing and pays a pittance to the loudest of the third world and the low islands.See.

No one was scapegoated in public but when Phelim McAleer when through the conference in a polar bear suit calling for Phil Jones, people all knew who that meant. They swore at him, threw things at him and tried to interfere with the camera and sound man. Phil Jones is the climatologist at the heart f the UEA CRU scandal. Polar bear suits were banned soon after.

Behind closed doors I suspect he (Phil not the polar bear) got mentioned a lot. Could any government have mentioned climategate in public. Probably not. The Cop-15 conference was teaming with true believers that were so fanatical that even the Presidential body guards of a dozen countries combined could not have held them at bay.

So what's the midnight deal.
The key features of note are that the targets a set in terms of temperature not CO2. This means that the 2 degrees target will be met by all because there is no real warming. Governments can later report on the current cooling trend as if its a new discovery and back away from CO2 reduction and commitments.
Expect a lot on negative feed backs soon. Its the suppressed science that the CRU etc were trying to keep out of peer review.

The other thing is that its non binding CO2 commitments and non binding financial commitments. None of there will be enforceable or enforced. With inflation expected in two years the amounts are trivial. Pledges to pay for solar energy technology depend on the cost of that technology, those costs are falling but with the dollar falling faster this means few renewables than the free-market, free from both Keynesian policies and government subsidies, would have delivered.
A few tens of billions have been promised to the third world and low islands. May third world counties can't survive without handouts from the west, they would get that money somehow.

The key game at cop-15 was to get out of commitments while all professing to be committed. In the light of the climategate it was not about saving their seats at the next election, its about saving their party for the election after that. This was a process of backing a way from the man eating polar bear with as few sudden moves as possible. 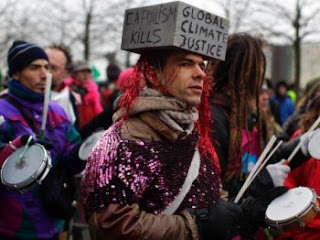 Are there any secret promises to scape goat the CRU, you-bet-cha. If governments aren't gunning for them then half the NGO's will be when their funding, both government and donations, collapse next year.

Lastly there's a huge blizzard descending on Copenhagen. Everyone may be stuck for a few days. Some noted that huge numbers of people flew in private Jets. These have been parked at smaller airports across the region. Their stuck. Al Gore may have to hitch a ride home on the Rainbow Warrior. What happens when a few thousand Bureaucrats, a quarter of a million bored but angry NGO's, communists and anarchists all get stranded in a snow storm together? The cops have had it with cold riot gear and frozen batons. Its not going to be fun. Technically their contract with the UN ends tomorrow.

The blizzard also means that many heads of state will be getting home earlier than most of their minders. Once clear of the big green monster how many will speak their minds? You could see something of this in the interviews after midnight. Questions of who's to blame or why decisions went the way they went are met with a pensive pause. You could see the words in their heads. “Don't mention climategate, don't mention the Hadley emails.” And then off they went with the usual waffle of meaningless answers.

I haven't had so much fun in years. I'm not a Prophet I'm not even Profitable. I should probably fix that.
Posted by wesley bruce at 10:46 PM