Looking at various sources this is my prediction for the US election. 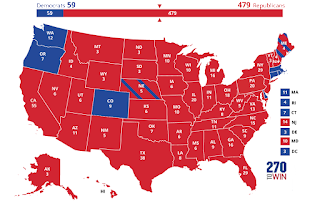 I have people I follow in social media who think California will go red; Republican. Proximity to the New York disaster, Cuomo and De Blasio, will flip not just New York but also New Jersey.  Trumps work with the black vote will yield results in Baltimore flipping Maryland red. Heads will explode and CNN and MSMNBC. I think the split states will remain split.

My Californian friends are seeing safe Democrat district go Republican in special elections. They are seeing no Biden signs in districts that should have them. They are seeing Trump signs everywhere. There is wide spread protests at Gavin Newsome's rules.

In the rust belt near the great lakes, we are seeing unions that once formed the backbone of the Democrat ground game now supporting or even working for Trump. Biden yard signs are not selling. Local and school board elections are going conservative. People are switching their voter affiliation from Democrat or independent to Republican so fast the system is over whelmed [or is using red tape to slow the process down,] Where the riots have resulted in burned businesses people are saying in public, to leftwing media, that they will never vote Democrat party again.

Nation wide people are working from home. This has three undiscussed effects. The house wife is probably not watching the generally left wing women on the cable channels. Dads home and wants the sports on while he works. Secondly the kids are at home and parents are discovering how bad public schooling really is, that's shifting people. Millions are away from the politics of the workplace water cooler or tea room. Workplace peer pressure is reduced. That may free up many middle voters to look at Trumps successes. This may have a big impact in silicon valley.

Additionally peoples saving rates are going up spectacularly which means they are more future oriented. People who are future oriented don't vote the policies of the past. They certainly don't vote for politicians that promise to tax their future gains.
The left is also relying on radical minority groups like the LGBT lobby; witches for Hillary; "moderate" moslems; the wall street left; however these groups inflate their numbers to get political support. If the left is believing those numbers they can be caught out badly as they fail to show up on voting day.

I do not think we will see Antifa or BLM voting Democrat we have seen too many cases of them rounding on the democrat leader that try's to pander to them. We've seen the graffiti Democrat members houses and even assault democrat leaders trying to control them. The political left has lost control of the radical left. Any fool can shout charge but shouting cease fire is much harder in a fight.

I suspect the Trump victory margin will be too large for post election day postal vote manipulations. Voter fraud is generally often polling staff fraud. Knowing they can't pull back 211 votes with that tool, many electoral staff will refuse to work with voter fraud projects and some will go whistleblower leading to charges for DNC campaign staff.

The Republican victory will chain down ballot replacing some democrat House, Senate, governors and state assemblies. Any plans to get states to make electoral collage vote to go contrary to the state vote will fail. Any dreams of the House or Senate making the decision will be dead. the new more conservative members at the state and local level will vote it down.

The end result is Trump winning both the electoral collage vote and the national popular vote. There will be massive protests in the streets but the politicians that back the rioters will be gone or shell shocked. We can not rule out the possibility that he will get all 538 electoral collage votes as even shamed and fed up deep blue states go red thinking its safe to do so because "the poles say Biden's in the lead".

Police will be empowered to act against the rioters and their leadership. I would not be surprised if politicians joining the riots get arrested and charged. Trump's 100% support from police entities means they are ready to act in enforcing the law and will have planned for events. That does not mean the left will not be rounded up without cause.

I am expecting a complete melt down in the leftwing media. I would expect the black vote change will trigger some leftist to reveal their innate racism on air. Swearing ay the black vote. On the ground there will be leftist black attacks on anyone that they think voted Republican. That will flip the rest of the nations black community in 2022.

I am also expecting a big spate of suicides with at least one media figure suiciding on air or just off camera. There will also be lots of failed attempts, suicide by car, dangerous and drunk driving. We will see dozens of on camera media resignations. Some will flee the country.

In short I am expecting Biden /Harris to get less than 100 electoral collage votes and Trump /Pence to be clear winners on the night with a margin that exceeds any reasonable postal vote or voter fraud.