Building the first generation of buildings on Mars.

The initial exploration of Mars will be in Mars habitats sent from the earth. 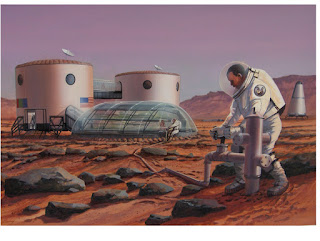 An early mars hab. Mars society.
Search mar hab for more.
However there would in all likelyhood only be four or five such missions. Once a good site is found with the prerequisites for colonisation a real base would be built from mostly Martian materials. Those prerequisites are a deposit of water ice or underground water, Iron or Aluminium ore, good rock for building or aggregate production and some nitrates.

Then an industrial module or two with the capacity to make structural materials would be sent to the colony site. Carbon fibre and carbon composites may prove cheaper and easier that metals. Carbon dioxide provides abundant carbon. Plastics can be made from CO2.

So the question is what structure to build? Most think domes but domes have their disadvantages.

Image from http://orig08.deviantart.net/cbf0/f/2010/176/b/4/mars_dome_01_by_ludo38.jpg
Domes have lots of round corners that boxy furniture and things don't fit into, Its hard to stack radiation shielding in a dome and you need some shielding to shut out the natural cosmic ray flux on mars.

There is another little known problem: While Mars is cold the structure will have a lot of heat sources inside it so there will be a heat dissipation problem. Domes are good at keeping heat in due to their low surface area to volume ratio. A box is good for getting rid of that heat without expensive equipment. It has more surface and one face is always in shade. 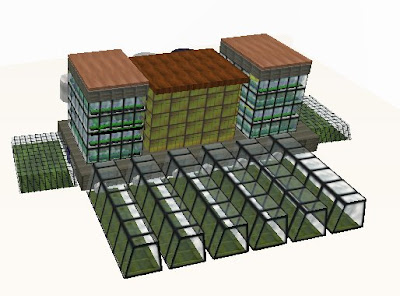 This structure has several advantages. Most surfaces are rectilinear so replacing panels and windows is easy. There are ample windows for natural Martian light to enter. There are views of the farm domes and the landscape beyond. Reducing any claustrophobia risks.
The Martian radiation flux is cosmic rays so its a vertical flux. As a consequence only the roof needs to be shielded. If you make the building multi-story then one square meter of shielding shelters many square meters of living space. The shielding would be just rock or gravel, ~2-3 tons per square meter of roof. Far more than most domes could handle. The main structure would be reinforced concrete or reinforces polymer bonded aggregate with carbon fibre or iron reinforcing.
This structure has several other features. 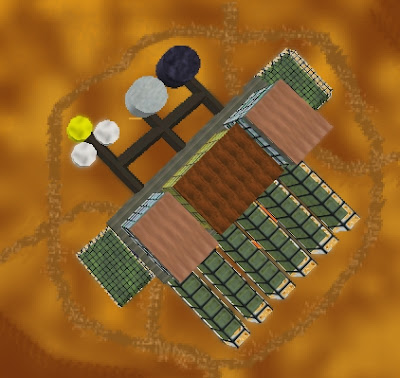 Viewed from above you can see that the buildings stand on a central base,or shared ground floor, that allows shirt sleeves access from section to section. The buildings are segregated so if there is any pressure breach or fire in any building people can escape to the other sections. Behind the building are several tanks for spare oxygen and other chemicals that are kept clear of the main structure for safety and temperature control. The greenhouses are less shielded because plants are less vulnerable to this radiation.

If you really like domes you can add them; 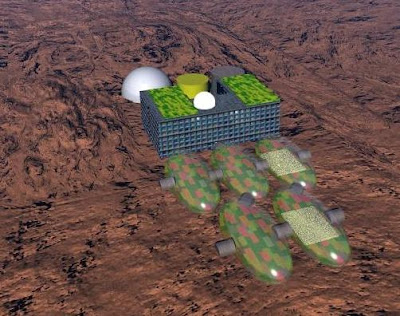 You could even add playing fields etc in them: 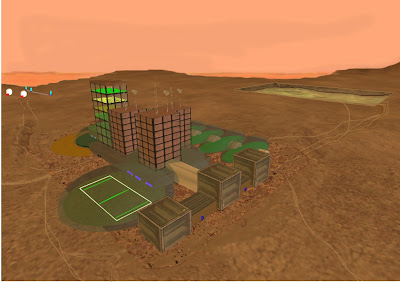 In the above structure we have a playing field. Short exposures to the cosmic ray flux is safe; it happens to you every time you fly on the earth. This sports dome doubles as a place to stitch together large plastic pressure structures. The brown boxes in the fore ground are chemical and heavy industrial plant units segregated from the main structure for safety reasons. To the side you have a mine and on the left in the distance you have the spaceport with its big white fuel tanks. 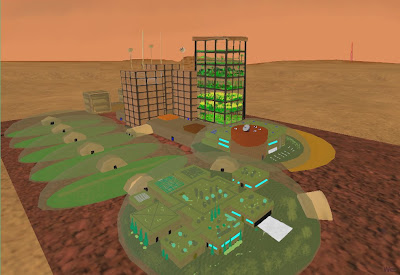 This Mars base has several kinds of farming. The university dome in the fore ground has planters and grasses on any available area to feed people and animals. This includes planting on the roof tops. Most activities are indoors within the buildings. The elliptical domes hold fields for grains, pulses and vegetables. There is a multi-story vertical farm behind the university with hydroponic and airponic fruit and vegetables. Most people and some livestock live in the three remaining tall buildings. Some things will be boringly the same as on earth; there is a cell phone tower on the ridge behind the buildings.

These structures would be built unpressurised. With pressure tight balloon like structures added to each floor and pressurised double glazed widows added to the out side. This gives the structures emergency redundancy. Essentially a plastic balloon in a box with internal panelling protecting the pressure balloon from knocks and wear and an outer shell to keep the sharp Martian dust away.


Eventually another technology will be used where suitable. These are low world houses. Roofed valleys with normal looking farms and suburbs. That however is many decades away. 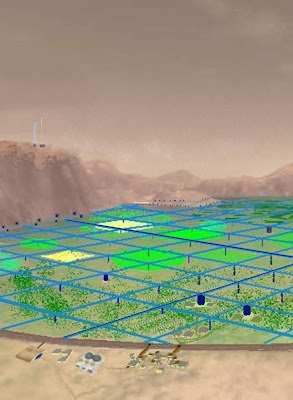 It may be possible to terraform Mars but these technologies will make it habitable without much fuss.
Most of my illustrations are done partly in Second Life and worked up in gimp. Some were on display within Second Life but sadly that Space Destiny's sim is now gone.

Anonymous said...
This comment has been removed by a blog administrator.
11:04 PM

Anonymous said...
This comment has been removed by a blog administrator.
2:15 PM

Anonymous said...
This comment has been removed by a blog administrator.
11:38 PM

Anonymous said...
This comment has been removed by a blog administrator.
9:45 PM