Many people see Mars as a nice place to visit but you would not want to live there. Many can’t even see the point of visiting. To win these peoples hearts and minds to the idea of a multi-planet civilisation we need to show them how Mars can be made habitable with technology they know and understand and with economics that they find believable.
Some have proposed a worldhouse or para-terraforming. Richard L. S. Taylor outlined the technology some years ago.

A world house is where you roof an area of mars, or another planet, with a roof a kilometre or two high. The area enclosed is made earth like with cities and farms and perhaps even wilderness. A world house is technically possible even today but it is an enormous feat of engineering costing quadrillions of dollars.

There is a cheaper more achievable option. We could roof a smaller area at a height of 15 to 100 meters relatively cheaply. A low world house or valley house is a normal feat of civil engineering on a par with normal urban or suburban civil-engineering. Like a modern cities: roads, drainage; the reticulation of power, water, sewerage and communications. Roofing an area is a doable land development task, that would be operational at the private corporate level and not the government megaproject level. It is incremental; expanding step by step. Hectare by hectare.  It is therefore more likely to happen.
The image says more than I can say in words. Part of gale crater canopied over.

The roofed area is on an urban scale but the city extends beyond it in a controlled way. The roof in this case is 60 meters high. The edge is anchored to a ledge on the hillsides and a berm with a concrete core and top. Like a raised road or dam wall the edge walls are complex works of engineering but ones we build regularly. The multiple plastic sheets that form the roof are anchored with care with concrete blocks and sealant.
The roof has vertical composite supports every few hundred meters and rafters that can support a light vehicle loaded with robots and replacement plastic. If the upper plastic is to be replaced. Cables laid from rafter to rafter allow the sheets to be drawn over the old sheet. Sealed in place and then the old sheet removed from below.
There would be several sheets bedded in the wall at two levels. The upper sheet is called the canopy. It is designed to take the damage of the wind, dust and UV. It is designed to be replaced regularly and is not pressurised. This upper layer could be designed to support small robots or  soft "snowshoed" astronauts. The robots clean and check the canopy. They may patch small holes and may even be able to strip off a few micrometers of dust or UV damaged plastic and lay down a new smooth layer in its place. The astronauts might be used for major repairs, emergency retrieval of a disabled robot, etc. Most work would be very light robots.

If you have a roofed valley wandering around in a space suit would be rare. Extra vehicular activities (eva) would still occur particularly for geologists and engineers.
The lower sheet is the envelope. It is pressurised and ideally it should also be able to at least support the cleaning and patch robots. It is pushed up against the rafters by the internal atmospheric pressure and is locked in place against the rafters lower edge. Vibration, Curvature and pressure sensors are used to detect leaks and stretching.
A roof of less than 100 meters allows us another option. A fire engine like vehicle with a telescoping boom capable of reaching the envelope with a bed sized adhesive patch. This would patch a small hole in minutes. Additional poles could be assembled to lock the patch in place freeing the truck to race to the next hole if there is more than one. With a higher roof this becomes much more challenging; very fast airborne patches would be required. We are experienced with the use of emergency service vehicles and have learned to trust fire services. On the earth the danger of things like fire and automotive accident are handled each day without panic. The danger of a micrometeorite hits on Mars can be coped with and thus reduced in a similar way.

The buildings under the roof  would be pressurised and alarms would get everyone in side in an emergency and seal the buildings. Airlocks added to such structures would allow trained emergency workers to pick up stragglers and support the patch teams. Both teams would be in protective suits. Livestock barns and other facilities such as farm pump houses would also be pressurisable to protect the farmers and fauna. Some species would be lost but not people or key livestock. A pressure breach would produce a rapid drop in pressure but the volume under a 60 meter roof is 0.06 cubic km or 60000000 cubic meters of air per square kilometre. It would take several dozen minutes to vent through a 10 cm hole.
A second expedient sealing technique would be set of hydrogen/ helium balloons tethered in each area. If a pressure breach occurs the resulting wind triggers the balloons release. It is drawn by the wind to the hole but can’t pass through. Adhesive patches activated by pressure and wind effects seal the balloon over the breach creating a temporary patch. Balloons stuck to the “sky” due to accidental activation will be a minor inconvenience.

My first design. Done partly in Second Life with editing in gimp. 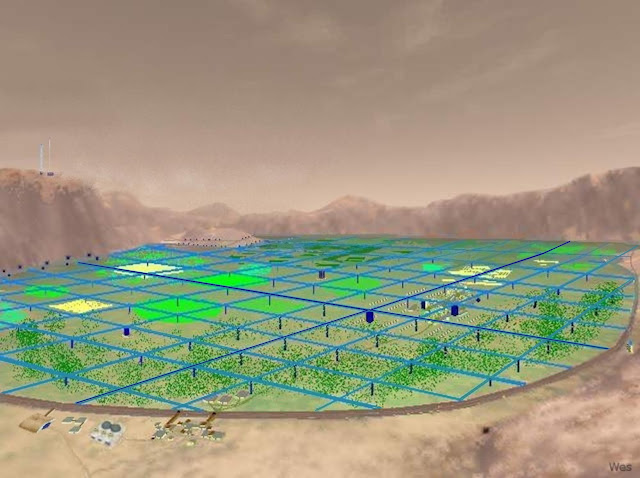 The accompanying picture shows several buildings. They are;

Inside the “dome” The low buildings near the entry/exit structures would be training facilities, robot assembly and perhaps a café for the workers in the adjacent external buildings.


All the radiation on mars is a near vertical cosmic ray flux a little greater that Denver Colorado or Nepal. The plastic does not stop it. By roofing the buildings with earth, stone or concrete you block that flux completely. If your wandering around in the open you are at a small risk but if half your time is indoors under the shielding of a building halves the dose. The target is to get the cosmic ray dose down to the levels found in Denver.

A totally biological life support system is possible; the ongoing work of Biosphere 2 has proved that. I prefer a hybrid system. Fine tuning the life-support with electrolysis and some plumbing. A set of distributed electrolysis cells turning water into oxygen for the atmosphere. The resulting hydrogen is fed to sabatier reaction units making methane which then feeds to a grid of pipes that link to storage. If the carbon and hydrogen is needed the methane is burned to yield the CO2 and water back to the ecosystem.
If the Methane is not needed back in the atmosphere, it can be made into plastics, fullerene composites, graphite's or diamond composite. Some of the hydrogen is retrieved in these processes.

The colonisation of Mars must ultimately be reduced to a simple problem of civil engineering. On achieving this the colony will quickly become self sufficient assuming each finds a product or service to sell to the others or to mother earth. Such a low roofed environment is also more easily explained to those that see the problems first and don’t grasp the opportunities. 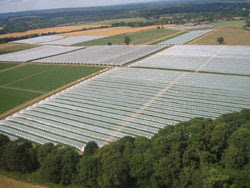 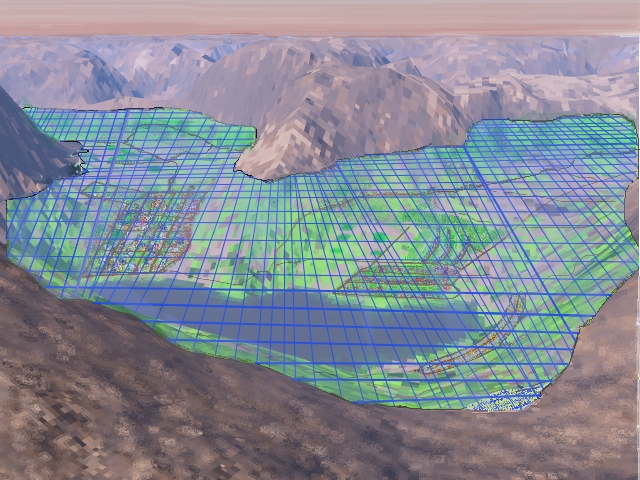 The roads under the canopy are brown, the houses are all earth roofed and are the multi-coloured areas. In the fore ground just under the canopy is an area of housing and equipment bays for inner canopy maintenance.

In this case the valley is deeper allowing a more natural sylvan [forested] landscape. The roof is supported on steel or fullerene cables anchored deep in the hills.
There is the option for a lake and recreations such as hang gliding. Birds and other fauna are possible. Repairs are by truck near the edges and airship inside the domes main valley over the lake. A surface repair car wide enough to spread its weight across three or more cables should be possible. This can support another vehicle via magnetic fields below the canopy. A magnetic repair vehicle slung under the canopy may also be an option if the cables are steel or have a magnetised track under them. A set of vacuum pumps, an inverted hovercraft skirt could create an inverted hovercraft.

Low world houses are not the first stage of mars colonisation. It may not be the last. It would however make living on mars normal in most senses. It reduces risks. Its kid safe if your air lock is not designed by idiots. It looks normal. It is doable with today's technology and free market capital processes.

For the earlier stages of mars colonisation read this:
http://appliedimpossibilies.blogspot.com/2010/10/building-first-generation-of-buildings.html

For the first stage see my NASA innocentive submission:
Coming.
Posted by wesley bruce at 3:22 PM