Ectogenesis - Saving the millions while ending the Abortion debate forever.

The Abortion and RU-486 debate is being fought as well an can be expected. I commend all those that have fought the battle well, championing our defenceless unborn brothers and sisters.

The disgrace of abortion will remain while we have only two choices life or death, moral [immoral] liberty or bondage to the ‘dangers and inconveniences’ of parenthood.
To sanction death of the innocent for the convenience of a few who find parenting a burdensome responsibility is unjust. I suspect however this generation will need to suffer the consequences of their folly before they will learn the error of their ways. The abortion challenge has many layers at the federal and state level. The laws themselves are often state laws. Support for education and family support are both federal and state. Many of the pressures to have unprotected sex and have an abortion are cultural challenges.
The western world and Japan are suffering a catastrophic consequence. Population decline and the demographic winter problem where an aging population can't support itself; there are not enough young workers to pay the pensions of the older citizens. There may be not enough young people even to care for the elderly in nursing homes and hostels.
A challenging new solution.
There is a way to break the nexus between life and choice but it will ethically challenging for it raises other ethical questions. It would create a new debate. One where many pro-choice people, opposing us today, would end up on our side of the debate. It is not a quick fix but it may be a path towards. An honourable end to the infant genocide. Live embryo transplantation or ectogenesis.
We are loosing millions of helpless babies slaughtered simply because they are unwanted and unloved by their parents. Or their parents and society is ill prepared to support them. Yet at the same time we have a shortage of babies available for adoption and we have an ageing population that can’t support its long term needs.

How do we move from a pro-death society sanctioning medically enabled and legal infanticide to a prolife society quickly?
In 1924, the British scientist J. B. S. Haldane coined the term "ectogenesis" to describe how human pregnancy would one day give way to artificial wombs. A friend and colleague Aldous Huxley wrote “brave new world”. This turned the worlds eyes away from the benefits to the dangers. Haldane was a socialist and a leading evolutionist in his day. However Haldane was not trying to abolish Gods institution of pregnancy; he was writing in an age of high maternal and infant mortality. That’s what he was trying to end.
The benefits are:

We are approaching the point where we can remove an embryo from the womb alive and keep it alive outside the womb. Around 2001:

To summarise the Clinical Ectogenesis process is the technology to remove the baby from the womb alive and place it in an artificial womb and take it to full term. Live embryo transplant goes further and moves to the point where we can take an early embryo unharmed from a woman that doesn’t want it and implant it in a medically prepared mother that does.
It amounts to moving the debate away from mass infanticide to a process of adoption direct from the abortion clinic. In considering the future of the unwanted unborn we can’t ignore this technology, with a little research, it may be available with in three years.

But this is the reality: A simple neat tank and a few tubes to the relevant equipment. 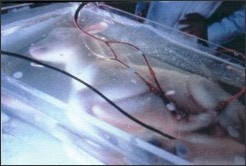 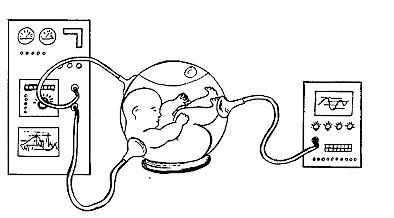 It’s not cheap or pretty but it’s a start.
Yes it is unnatural. That is true of all modern medicine.

If the Lord chooses, he will allow the technology to develop and become safe, cheap and ethical. It will be legally constrained with laws written by Godly people.
If however it comes without our prayer and care.

Take a look at adult stem cells. Many in the church and key politicians championed them over embryonic stem cells and in a few short years great things have happened.

Ectogenesis may seem daunting but look at the alternatives! 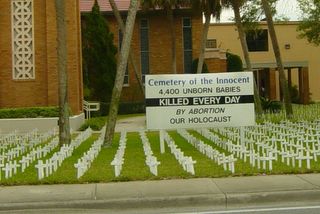 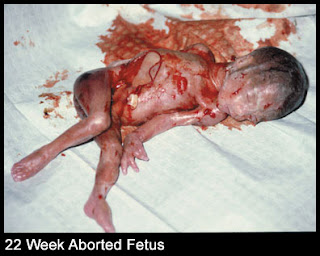 If we took on ectogenesis will the Lord also bless it?

Some might baulk and ask are we allowing immorality and irresponsibility to prevail if we take on this technology? Do the pro-choice lobby deserve the choice?
Consider this;
Most importantly.
The Roe v Wade verdict is predicated on the inability to grant both life and choice. If survival of the baby is possible the wording would imply that ectogenesis would be favoured over the death of the baby.
See: ECTOGENESIS
Development of Articial Wombs Technology's threat to abortion rights
Sacha Zimmerman Sunday, August 24, 2003
http://www.sfgate.com/cgi-bin/article.cgi?file=/chronicle/archive/2003/08/24/IN273768.DTL
Yes we can fight abortion with Laws, education, evangelism and revival. We might see the issue batted back and forth across the media and parliament endlessly. We could see it lost to an obscure bureaucratic committee. The prolife lobby may even win in 80 to 100 years. That’s arguably how long the last reformation took with its conflicts in many parliaments and on bloody battlefields.
As we fight we lose thousands of little lives per day.

We could be saving them in ten years or less if we tried to get this alternative established. If politics is the art of the possible then we need to think laterally and look for the third path.
We are forewarned and forearmed by Huxley and other science fiction writers. Leading ethicists have considered the risks. The dangers of some idiot trying to clone an army or create subhuman slave species are known. The dangers that some future humanist society may try abandon motherhood altogether are foreseen. They will most probably destroy themselves in the attempt. Unless they out law pregnancy and family or try to exterminate us “breeders”; we can leave them to their folly. Others have tried to abolish family replacing it with institutions of various kinds. It always fails. Perhaps we can rescue a few million disillusioned refugees when it all goes wrong. None of the dangers are as real or as monstrous as the death of the defenceless.
The challenge we face is not to deal with every possible abuse of new technology but to be those that have sought the just applications, to have considered and are prepared for the consequences, to have sought alternatives. If we can’t legislate the dangers away then we can’t legislate anything and we are defeated.
For us there are other things that will be cheaper still than the clone warriors of star wars, the medical clones in the movie “The island” and the human batteries of the matrix. We should remember that a dictator does not need artificial wombs, he has something much cheaper, a women's prison!

If we put ectogenesis on the table, fund it a little, look at its consequences then we have moved the debate forward from today's stand-off. If we ask Gods help and guidance then will he not honour our request with a solution?

Are we ready for the challenge! Dare we seek to save millions. Dare we not!

Wesley Bruce
Posted by wesley bruce at 7:11 AM

This has the potential to be such a blessing to couples who have not been able to adopt over the last 10 years.