Intrade is renowned for its accuracy but the question is does it lead or follow can it be gamed, is it being used as a propaganda tool  and can it be manipulated to be wrong in the end or will it correct at the last minute.
intrade
Here's the action for oct 12 USA 8 to 12 midnight After the Biden/ Ryan debate noise hit and before the news that the BLS Jobs number had been distorted in the previous week by simply leaving out California without mentioning that little fact. [Head may roll at the BLS before the election if congress goes at this. They will definitely roll after January if Romney wins. ]

Notice two things: The two spikes ringed in blue are clearly someone using a lot of money to pull the market back up to 61 form 60 and failing. Even if Obama wins at the current price their money's gone.

Not also the area in dark green. That's a huge number of small trades trying to hold the price up by automated buying at that price anything below it. Again it shows that there are organized players with software driven trading tools in the market. They are trying to keep obama up and Romney down in the hopes that that will influence the vote and demoralise the Romney support base. If anything its having the opposite result on the vote its self. 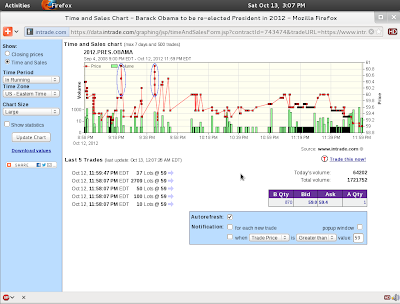 It could back fire and loose the obama supporters their money by causing the Obama voters aware of intrade  and the other markets to conclude that Obama's a shoe in and can't loose. There is a risk of a lower turn out of Obama supporters thinking they're not needed.

Like wise those aware of this market and its history may try to push harder where it matters. Spreading the message to their friends via new means and old.

I am not a gambling man so I don't bet on intrade but it is fascinating to see these people battle with their (or someone else's money).

Obama won so it was not out by much. Gary North argues that this is more accurate than polling. Clearly he's right even if people seem to be using bots. It accurately predicted that the USA was completely insane as a majority population.
God help America and the rest of the world.