The three way war over Ukraine.

l believe people are making a mistake of seeing Volodymyr Zelenskyy's Ukraine as the same Ukraine that worked with Biden, the Clinton's, etc. It has even split pro trump people badly.

Zelenskyy beat the Globalists candidates in an election. In the 2019 he got 73 % of the vote in the second round beating Poroshenko. In the first round he had beaten Poroshenko and Tymoshenko while also beating both the neo-Nazi and hard line communists. None of the globalists got more than 30%. Neither the hard right and hard left got more than 2%. Zelenskyy played the president in a comedy and in that show he was an anticorruption candidate. The show was called "Servant of the people" and his party going into the election had the same name. They tested the policy platform in a TV show before running a real campaign. The TV show is on netflicks.

After getting elected Zelenskyy sacked the remaining neo-Nazi hardliners in the parliament positions and the government and cleared out many corrupt officials and military. These reforms went unreported in the west.

There are Neo-Nazis in Ukraine but they never supported Zelenskyy or were supported by him. Others are accused of being neo-Nazis by Russia on Spurious grounds. In some cases the only real Nazi connections some of these people had was the fact that family members had fled to Germany from Stalin in the 1930's or that they had west German educations in the 1980's. Remember Russians of Putin's generation were taught that WW2 ended with the German Nazis and the Americans allied against the Soviets. They see the surrender of Nazi Germany as Fake.

Since 2019 Zelenskyy has done several conspicuous things. Supported Trump in his battle with the corrupt actors in congress. Including releasing an otherwise confidential phone conversation. Clearing out and in some cases prosecuting the Ukrainian oligarchs that are associated with Biden, The EU Globalists, George Soros, etc. Though he has done this legally though the courts and some of the corrupt players have won in court. This is identical to Trump in some respects. Zelenskyy's mean tweets are funnier.

At the same time Putin was making threats and putting troops on the border. I did not think Putin would invade. He had the wrong troop mix and assets. However Putin did invade and its been a disaster for Putin precisely because he had the wrong forces, poor gear, corruption  and inadequate training etc. Putin either did not care or was never told. Russian corruption meant that money for preparation and vehicle maintenance went into the pockets of the generals and others.

Tired vehicles need to be moved or maintained regularly to prevent the tires degrading. It is evident this was not done. Some of the tires also came from China where cutting corners is now a communalist party tradition. The tires perished and blew when the tire pressure was lowered to cross soft ground. Russia's key advantage in WW2 was that it could operate in the mud and snow on the wide steps. the Ukrainians had the same vehicles and armour but they maintained the machines and were using tires from eastern Europe. They have maintained their cross country mobility. The Russians are stuck on the roads strung out and easy to ambush while the Ukrainians can cross the fields moving generally only at night with western night vision. As a result almost no area of the front is unreachable for the Ukrainians and they can strike in areas Moscow has marked on the map as theirs.

The Russians made a second key mistake. Most western countries do not use reactive armour. This is an armour system that uses explosives to Disrupt a shaped charge round. however this means your tanks are coated with little flat bombs that can detonate without warning in a battle. As a consequence its unsafe for Russian troops to give the armored vehicle any close cover or use an armored vehicle or tank as cover to advance on a position. Watch old WW2 or Gulf war videos and you see that moving in close formation with the Tanks, AFV's and APC's is essential. Fearing their own reactive armour Russian conscripts can't even debus, leave the APC, while its under fire.

Seeing Putin's build up, and with less corruption, Zelenskyy prepared his country for war. They built hidden arsenals across the country side. He appears to have bought and built decoys for aircraft, armour, radars and antiaircraft assets. Thus on the first day Russia destroyed a huge percentage of Ukraine's forces without effect. In some places Ukraine lost more air assets than they had. Yet it was all back and active days later! That tells us the Russians were hitting decoys not the real thing. The real assets were already disbursed to road based runways and hidden airbases. This is something Switzerland, Sweden and Finland all do. Its not something NATO does well though they have tried. For Scandinavia its the first strategy. For NATO, and Russia its a back up strategy.

Kyiv prepared for guerilla warfare before the Russians crossed the border. Ukraine's army melted away in the first days. In some places the Ukrainian border forces itself were illusions. They also have engineered one of the worlds biggest civilian evacuations in human history. It may have looked chaotic and haphazard but you do not move 3 million people in three weeks without a plan.

Donald Trump will have known what reforms Zelenskyy made and Trumps sarcastic remarks at CPAC as Russia invaded were probably because he saw the trap Putin was walking into. Pompeo made similar sarcastic remarks the same day. Trump knows what weapons, technology, intelligence and codes he already passed to Kyiv. Biden has to ask and Washington may not trust anyone in Biden's White House to drop hints. What you don't know, you can't sabotage. Still Trump and Pompeo's sarcasm was dangerous because the left can't grasp sarcasm and many in Maga are confused.

Now Ukraine is getting reinforced with volunteers from around the world. Train loads of weapons are arriving. These will back fill western Ukraine freeing trained Ukrainian forces to move on the Russians in several places. Many of these members of the Ukrainian Foreign Legion will never see or fight a Russian. They will be guarding facility, armory's, manning checkpoints, and guarding prisoners. Many will be doing boring convoy duty. Watch they will start complaining next week at how boring the war is.

People see the world as two sides in a fight. However we must must learn to see how the world has multiple bad forces. It's a three way fight globally. Four if you count Islam but for now I wont. 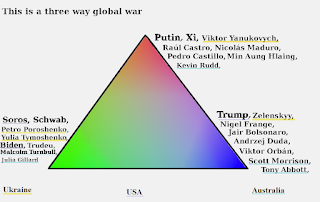 In the chart above I give the factions. It marks US and Ukrainian leaders. I'm an Australian so I've included Australian politicians on it. Some recent Australian labour politicians have been left out because that have been so ambiguous and wishy washy that they can't be places anywhere coherently. The same is true for Britain, except for Nigel Frange. Google the names to see how few allies Putin has. Do the same for Soros.

If we see its a three way war we can see how to support Ukrainian nationalism without supporting Klaus Schwab's world economic forum. We can discern between NATO and the EU. We can see how heavily armed neutrality may eventually be Ukraine's future. we can see how Putin might fall without the globalist's winning. As the Joke goes. If Ukraine wins this war NATO may apply for membership in the Ukrainian Foreign Legion. We may even see a civic nationalist Russia, free for real this time.