Sea steading as a fleet of vessel classes.

Most think of sea steading  in terms of cities on the sea with a single design and structure. I.e.
Oceania. 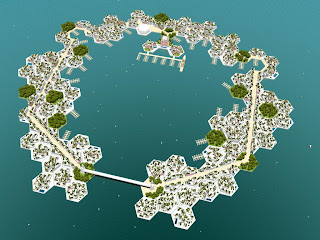 Or one of the more modern TSI sea stead designs. 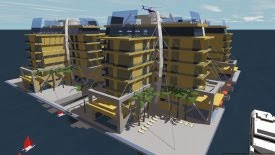 or a spar or flip ship design. 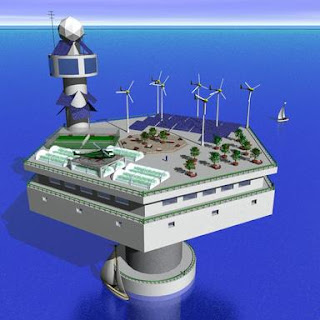 However, it is highy likely that a sea stead complex would be a mix of such systems intergrated into a city.
Something like this. 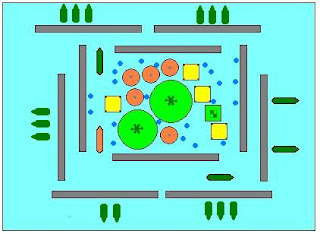 Here we have a large variety of vessels and structures.
The area enclosed by the gray wave damping units is calmer with wave heights ~1% of the normal height. Since most seasteaders are hoping to pick an area where average wave heights are 3 -5 meters (9-17 feet) this would reduce them to 3 - 5 cm (1-3 inches) 10% of the energy of those waves could be tapped for energy by the wave-steads.
Everything would be held in place by a array of large deep sea anchors. 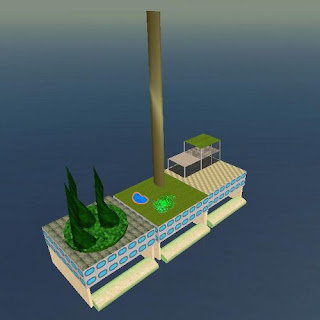 A wave stead rests on truck like axles connected to non circular buoyant tubes. These Salters duck tubes, cream in the picture, rotate in response to the action of the waves. Because the wave forces are converted to rotating oscillation we can tap off that force as usable energy and the bulk of the wave energy does not convert into heave or rocking on the sea stead on top. Energy only units would have a skeletal deck and no super structure. The first duck, visible, Damp the waves 90% The second, hidden, damps the residual 10% down by 90%.
The ship based sea stead would look like this. There's a man standing on the bow for scale. 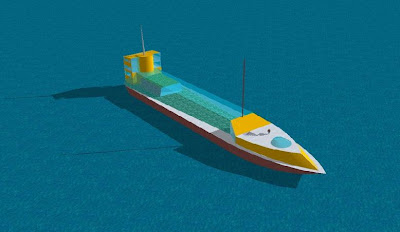 Float ponds and algae bladders. With some robot boats and a small spar based sea stead. See http://vacoyecology.com/Bubble_ponds_fluke_boats.html 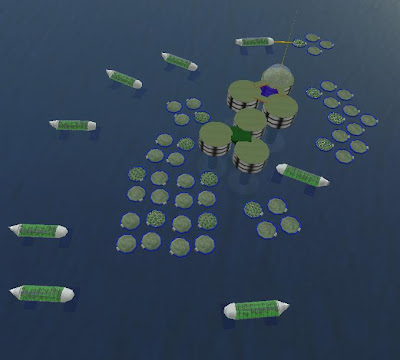 The top three structures could all be used to some extent in the sheltered area of the center.
Modern cities are not built with one architecture dominating the landscape. Why should we try that at sea?
Posted by wesley bruce at 3:36 AM