My take on the Australian election. 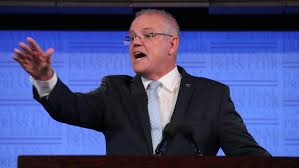 We live in an age of political upsets. Trump won in the USA, Brexit in Britain, and now Scott Morrison won in Australia. This is the story that everyone is talking about. The pollsters got it wrong yet again. They predicted a win for a leftist party and the party on the right that had no chance won.
However this is not just happening in these three case. In hundreds of cases in State & local votes its happening. Its happening with Viktor Orban in Hungary, the destruction of the left in Poland, and nationalist parties from Greece though France and Germany to Scandinavia. In a few places the left still holds on at the top or in the bureaucracy but the ground is falling out from under them.

Scott Morrison, above, is the parliamentary leader of the Liberal party of Australia. In Australia we never gave the term ‘liberal’ away to the Marxists. Only America has made that mistake; most liberal parties worldwide, that are older than 50 years old are centre right not on the left. This is written for my american friends.

The Labor party was supposed to win last week. Bill Shorten was the man of the hour. He has been a leftwing union lawyer since leaving law school. He ran with a mix of policies including a variation of the green new deal, promises of free stuff that would make AOC blush. He talked up new taxes on capital gains and a franking tax, a tax on dividends, and mining taxes. His party had attacked the church, anti-abortion campaigners, and anybody warning about the Islamic lobby. They talked about trade deals with communist China that would bankrupt exporters. China still owes us for food and resources the last Labor government sold it at a, ‘workers of the world unite’, loss. It can be argued that the rise of China is due to resources never paid for in the 1990’s. Over 50% of the stuff from China is re-packaged Australian resources.
They expected to win. This was their prediction. 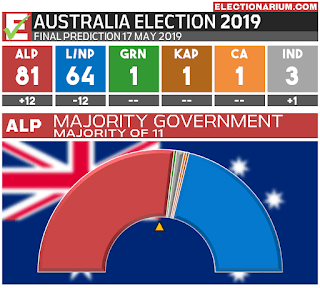 Malcolm Turnbull was the previous parliamentary leader of that party and was the PM that got into an argument with Trump while congratulating him on his election. Scott Morrison replaced Malcolm Turnbull in a parliamentary vote 8 months ago.
Malcolm Turnbull was a “wet” in Australian liberal party context “wets” are the equivalent of RINO’s in the Republican party. Conservative members of the liberal party are called “dry’s” in contrast. Historically wets loose to Labor, then drys win back a majority once they retake control of the party from the wets. John Menzies, the founder of the party in the 1940’s, John Howard the longest serving finance minister and PM, Tony Abbott his chosen successor, and now Scott Morrison are all drys. Free market, free press, Christian morality and free trade but using protectionist tools where you’re being taken advantage of. Trumps platform and some elements of his speeches are directly from John Menzies late 1940 policy or more likely his biography.
So why did the election go so badly for Labor?
This is the result today:

Australia is a country of coalitions. The liberal party and the national party (a rural right farmers party) rule in coalition when they win. In some states they are merged. More mergers can be expected with this win. In Australian politics we use the term Coalition almost as if it was a party name.

Labor once ruled outright but has been shrinking. We had a the post EU collapse of Australian industry, exports to England stopped as the EU banned them, so fewer workers and smaller less financial unions. With the fall of the Soviet block the Australian labor party has been shrinking fast. It now needs a coalition with the greens and a few confused independents to rule. It just lost several seats and some of their green partners.
Australia also has a preferential voting system. This means you number your preferred candidate/ party in order. If your candidate fails to get 50% (comes third) part of his vote goes to your next preference. https://en.wikipedia.org/wiki/Preferential_voting
We have what the US calls instant run off.

This leads to preference deals. The liberals preference the nationals then other centre right parties. Everyone reciprocates. This year the liberals listed the Nationals, Palmer United (a mining magnates party), Pauline Hanson One Nation (nationalist but accused of racism), etc. This year preference deals mattered.
In this election both Liberal and Labor lost votes to Pauline Hanson's One Nation. However One Nation was preferencing the liberals so the votes flowed back from One Nation. Greens lost votes both to Labor and other leftist micro parties. Thus votes were going from Labor to One Nation and on to the liberals. Previous Coalition parties have attacked One Nation this time they were disciplined, did not and it worked.

So the coalition has won a working majority and is on track to a bigger majority.
Scott Morrison called it a miracle.
His platform was simple: “it’s working, lets not change course now.”
Labor called it the Climate Change election. Yet the left lost massively. Even Al Gore was over here to help and they lost massively. Its over for the lefts agenda and they have no other agenda. Common sense prevailed. There is no anthropogenic global warming.

Why were the polls wrong? Because they are not really anonymous like secret ballots. The pollsters know your number. The left threatens the right when they loose an argument. This election we had several assaults, one stabling of a conservative and a campaign van burned.
The right knows this and knows that the pollsters are using uni students to do the drudge work. These university students who can see the data and can find the address of the number if they choose to.

We all know this. So conservatives and others on the right hang up. Most pollsters count only those that complete the survey. With conservatives rejecting calls and the left eagerly wanting to be heard, the bias is immediate and almost unresolvable.
I can however see a solution to this; Getting a ratio of call attempts to call connections, both to call completions and count a percentage of those rejected calls as conservatives and then creating a bias adjusted number. I need to form a company. A dyslexic pollster is a really bad idea. So's a dyslectic blogger.

Rowan Dean an editor, pundit and comedian did predict it and called the election.
https://www.spectator.com.au/2019/05/rowan-dean-i-predicted-all-along-that-morrison-would-win/

Sky news called it too. https://www.skynews.com.au/

The left is vocal while the right is quiet. This is worldwide. We are a people of solutions not debate. We are notoriously bad at debate. Commonsense, free market, and morality is hard to teach, easy to loose. We need to take back the schools. Where we stand for Nation and equal opportunity we are called racist and sexist by the globalists and the social justice warriors. We are thus invisible to polls but strong in secret ballots. Polls still have a value in guiding campaigns. The first person to fix them will get rich but the left will call you racist for just trying.